Nowadays, solar power has been an attractive option for many homeowners because of its environmentally-friendly feature and affordable price. When it comes to solar, there always be some confusions about what it means to have a system that is “grid-tied” vs. a system that is “off-grid.” Our goal is to simplify the differences for you and help you become a more educated homeowner in the field of solar. 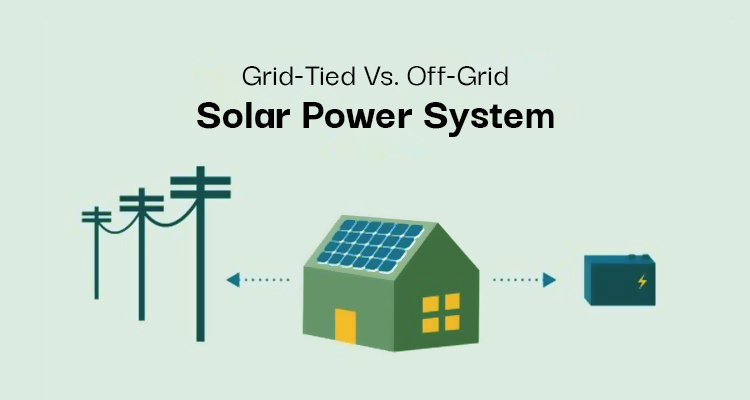 Brief introduction of these two types of solar systems

The grid-tied system is the more popular choice for some reasons. They are the most cost effective and the most efficient among the different types of solar power systems available today. Besides, grid-tied systems are the easiest to integrate into your current way of living.
A grid-tied solar system is dependent upon your municipality’s electrical grid. The DC electricity generated by the photovoltaic panels is sent through a grid-tied inverter, which converts it to AC power that is compatible with the grid.

Off-grid solar systems can run independent from the electric grid. In order to accomplish this, they require additional hardware. For those looking for complete independence from their power company, or with a home or business in a remote region, off-grid solar systems are the place to start. These systems are more complex and expensive than their grid-tied counterparts because it is highly recommended to include a battery storage system, backup generator, or both.

（1）Access to Electricity
If you decide to install a grid-tied solar system, you will always have access to electricity (unless the grid goes down), whether or not your solar system is producing.
If your system is not producing any electricity or not producing enough electricity to power your devices, lights, machines, etc.that you’re using, you can pull energy from the utility grid to supplement it. This ensures you always have enough electricity for what you need.
On the contrast, with an off-grid solar system, you’re completely reliant on the sun or energy stored in batteries to power your home or business. What’s worse, if you do not have batteries or a means to store your energy, you will have less or no electricity when it’s cloudy, and you will not have electricity at night. With an off-grid system, you will not have access to extra electricity if you need it.
（2）What happens when the grid goes down
If your solar system is grid-tied, you can get access to electricity whenever you need it. But once the grid goes down, you will not have electricity, unless your solar system has battery backup. This is a disadvantage of grid-tied systems over off-grid systems, if keeping devices up-and-running during a power outage is important to you, then you may be interested in adding batteries to your grid-tied system.
As for the off-grid solar system, it is working independently from the power grid. If there is a bad storm or event that knocks out the power, this type of solar system can continue operating. You won’t notice changes in your service or access to electricity.
（3）Electricity bills
If you choose a grid-tied system, you could still see a few minimal charges on your electricity bill, even if your solar system provides 100% of your electricity.
One type of charge you may continue to see is the service fee or delivery charge. This is the cost levied on customers for connecting their home or business to the grid. Another type of charge you can see is demand charges. Demand charges are typically levied on commercial properties and are the increased electric rate you pay for the power you use during a peak demand period.
If your solar power system is not tied to a grid, you won’t receive an electric bill at all. However, even with no electric bill, off-grid systems are often more expensive because of the additional equipment like batteries that are needed to make it viable.

There are distinctive differences between grid-tie and off-grid solar systems. Depending on your needs as a homeowner, it will be up to you to choose which option appeals to you more.
By SRNE|2021-04-21T15:10:39+08:00April 21st, 2021|Blog, Free Guides|Comments Off on Differences between Grid-tied and Off-grid Solar systems