Nowadays, storage battery is becoming an increasingly popular addition to solar power systems. Two of the most common battery types are lead acid and lithium-ion. As their names imply, lead acid batteries are made with lead, while lithium-ion batteries are made with the metal lithium. Therefore, there are differences in performance and cost due to their differences in chemistry.

Lead acid and lithium-ion batteries can both store energy effectively, but each has unique advantages and drawbacks. 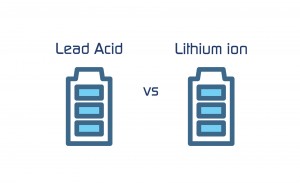 Here are some important comparison points to consider when deciding to choose a battery type:

This is usually the factor that comes to everyone’s minds and a key driver for deciding the battery type for my solar power system. As is often the case, it is not a simple answer. Cost effectiveness is really dependent on the needs of your application. Lead acid battery is cost-effective and great fit for large scale stationary applications where space is abundant and energy requirements are low. However, when you start looking at price in terms of the power or range, lithium ion battery can often be a more favorable option.

Depth of discharge is the percentage of the battery that can be safely drained of energy without damaging the battery. According to the research, lead acid batteries only be run to 50 percent depth of discharge. On the contrary, lithium-ion batteries can handle deep discharges of 80 percent or more, which means that they feature a higher usable capacity.

Just like solar panel efficiency, battery efficiency is also an important metric to consider when comparing different options. Most lithium-ion batteries are 95 percent efficient or more, meaning that 95 percent or more of the energy stored in a lithium-ion battery is able to be used. Conversely, the efficiency of lead acid battery is closer to 80 to 85 percent. Higher efficiency batteries charge faster, and similarly to the depth of discharge, improved efficiency means a higher effective battery capacity.

Both lead acid and lithium-ion lose capacity in cold weather environments, but lithium-ion battery loses significantly less capacity as the temperature drops into the -20°C range.

Lead acid batteries compare poorly to lithium-ion with regards to environmental friendliness. Lead acid batteries require more times and more raw material than lithium-ion to achieve the same energy storage, making a much larger impact on the environment during the mining process. The lead processing industry is also very energy intensive, which leads to large amounts of pollution.

Lithium also have its own environmental problems. The major components of a lithium-ion battery require the mining of lithium carbonate, copper, aluminum, and iron ore. Lithium mining specifically is resource intensive, but lithium is only a minor portion of the battery by mass, so the aluminum and copper environmental impacts are much more significant. The lithium-ion recycling industry is only in its infancy right now, but the cell materials have shown high ability for recovery and recyclability, so it is expected that lithium-ion recycling rates will rival lead acid.

In conclusion, lead acid and lithium-ion battery offer pros and cons for the energy storage industry. When calculating the balance of the pros and cons for a specific application, the above factors should be considered.