With the increasingly serious situation of COVID-19 all over the world, countries have adopted border blockade, traffic restriction and other controls. As of March 20, 2020, at least 41 countries in the world have entered a state of emergency. In order to alleviate the crisis of economic stagnation, countries accelerate the promotion of photovoltaic industry’s economic stimulus program.

According to the report,the government provides basic services such as installation and maintenance of the solar energy storage system for the residents at home who affected by the COVID-19 , which is an opportunity for the development of California’s photovoltaic industry.

In mid March, the Australian Prime Minister launched an economic response,worth $17.6 billion,in order to alleviate the influence of the pandemic.Including the installation of commercial and industrial solar energy projects, and large-scale power plant installation tax relief.

A few days ago, the General Administration of Customs of India issued a notice that the customs declaration forms of import general manifests (IGMs) submitted on March 21-31, 2020 or delayed before April 3, 2020 will be exempted from the late fee, which is a temporary relief for India’s photovoltaic industry which relies on imported modules.

In addition to the use of photovoltaic industry to restore the economy,more countries have also integrated it into recovering the impact of the pandemic.

During the pandemic, South Africa is in recession,power companies can not burdened with the  heavy load, and the limitations of electricity appear frequently, leads to serious shortage of internal power supply which makes the ventilator, blood analyzer and other medical equipment in the hospital and treatment area can not operate normally,and greatly hinders the control of the patient’s condition.

Therefore, South Africa has invested a lot of money in photovoltaic power industry to meet the country’s huge demand for electricity, and imported a large number of all-in-one solar charge inverter to solve the power supply problems in hospitals and patient treatment areas.

In recent years, as the only electric energy converter which unlimited by space-time, geographical and other factors, the all-in-one solar charge inverter is the most stable, reliable and low-risk power conversion project in the current stage of photovoltaic power generation. It is committed to the installation in the place where the power is insufficient. It can not only meet the huge power demand, but also get low power cost, which has gradually become the top of energy conservation and emission reduction among countries.

The industrial-grade design of theall-in-one solar charge inverter can easily deal with the harsh environment such as low temperature, humidity and cold, greatly improve the limited development of enterprises due to the production environment, and protect the industry 360 ° against short circuit, over-voltage and under voltage, reverse irrigation and other problems. 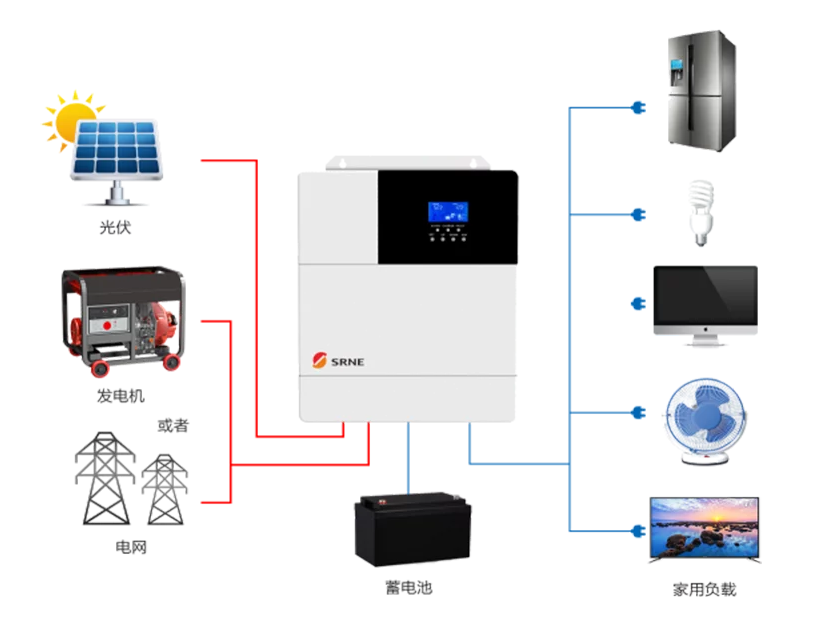 In addition to industrial applications, the inverter can also be installed in residential areas to serve domestic electricity. It can be used in conjunction with photovoltaics, generators and power grids without consuming any surrounding resources to convert solar energy into usable Electric energy, suitable for all kinds of AC and DC household loads.

In the current situation, SRNEI will continue to forge ahead in the future, shoulder the social responsibility of enterprises, firmly base on the market with quality and value, and change the world with green energy technology.