How much do you know about fishery-solar hybrid system

How much do you know about fishery-solar hybrid system？

Solar power is a clean and renewable energy source, which has been applied to a large number of areas. As we mentioned in the past blog, floating solar farms are a recent development. Today, we will talk about the fishery-solar hybrid system, which is one type of floating solar farms.

“Fishery-solar hybrid system” refers to the combination of fishery and solar power generation. A solar array is set up above the water surface of the fish pond. The water area below the solar array can be used for fish and shrimp farming. This is a new type of power generation mode.

The fishery-solar hybrid system build a intelligent fishery area with zero-pollution and zero-emission, which realizes the traceability and control of the whole farming process and effectively solves the problem of source control in food safety. It speeds up the transformation and upgrading of traditional aquaculture. Developing and promoting the clean, efficient and low-carbon innovative model will not only realize the harvest of fishing and electricity, but also open up a brand new road for the sustainable growth and green development. 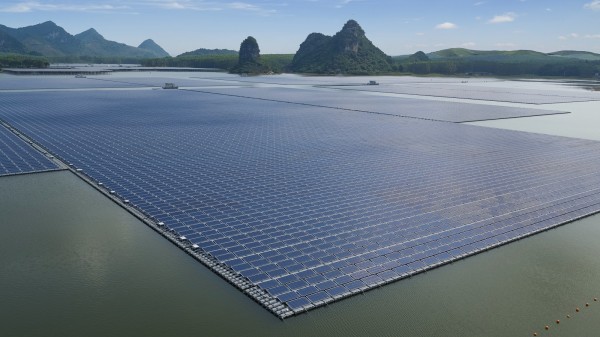 1. In the hot summer, the floating photovoltaic power station can effectively reduce the water temperature, prevent the outbreak of aquaculture diseases as well as adjust the metabolism of fish so that they will grow quickly.

2. The solar modules can shelter water surface from sunlight, resulting in preventing the large-scale outbreak of algae in the reservoir, improving the water quality and providing a better environment for freshwater organisms.

How to choose the project site?

To choose the suitable site for fishery-solar hybrid system is not easy.

The features of the places which are suitable for fishery-solar hybrid system:
-Abundant solar energy.
-Near the transformer substation.
-Traffic convenience.
-Large area.

The features of the places which are not suitable for fishery-solar hybrid system:
-The site is a small reservoir, flood flowing area, flood retarding area, or flood releasing area, etc.
-The site is a navigable water area.
-The design life cycle of the reservoir is less than 25 years.

This project is located in the coastal beach on the west side of Gaotang Island, Xiangshan County, Zhejiang Province. 637,000 monocrystalline silicon photovoltaic modules are laid on the beach which is over 4,500 acres. The upper space is used for power generation, and the tidal flat is used for aquaculture. This project greatly improves the development and utilization value of coastal tidal flats. At the same time, it corresponds with the local island and rural tourism development plan, which will bring ecological benefit, social benefit and economic benefit to Xiangshan County.

The fishery-solar hybrid system innovatively combines solar power generation with fishery, which not only saves the land, but also outputs environmentally-friendly and clean energy.