What is the best angle for your solar panel

What is the best angle for your solar panel？

Nowadays, more and more homeowners tend to invest in solar panels and install their own solar power systems. If you are a solar homeowner, you will definitely want your solar panels to generate as much electricity as possible. One of the ways to do this is by tilting them at the optimal angle so that they can capture the maximum amount of sunlight year-round.

Solar panels give the highest energy output when they are directly facing the sun. The sun moves across the sky and will be low or high depending on the time of the day and the season. For that reason the ideal angle is never fixed. To get the most sun reaching the panel throughout the day, you need to determine what direction the panels should face and calculate an optimal tilt angle.

So what is solar panel angle? To be simple, it is another way of describing the vertical tilt of your solar power system. When a solar power system is level with the ground, it has no tilt. If it’s standing upright— perpendicular to the ground — it is at a 90°angle. The best angle for your solar panels is the one that allows the panels to get the most direct, perpendicular light.

The solar panel angle can affect the amount of solar electricity you generate and is based on two factors: latitude and the season. 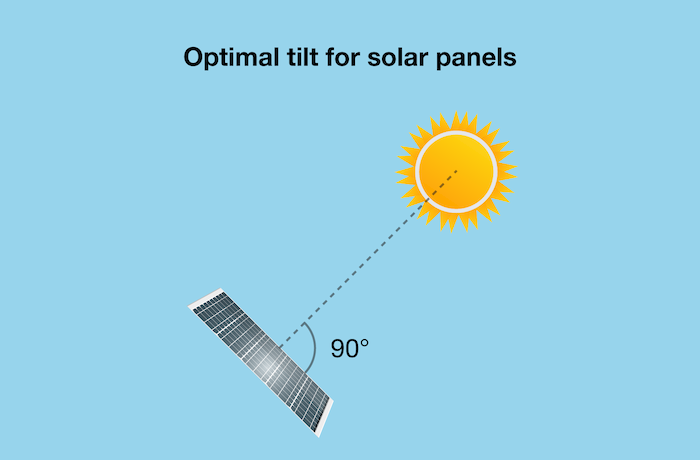 What is the best angle for your solar panel

The angle of tilt increases with latitude — the further your house is from the equator, the higher your tilt angle should be.

For example, in countries located at lower latitudes, the sun is higher in the sky. In these countries, solar panels require a low tilt to capture direct sunlight. On the contrary, for countries at higher latitudes, the sun is lower in the sky. In those countries, solar photovoltaic panels should be installed at higher tilt angles in order to receive maximum sunlight.

So how to calculate the solar panel angle for your country? There is a simple rule of thumb for calculating the best tilt angle for fixed-mount solar panels. Subtract 15 degrees from the latitude at your location during summer and add 15 degrees to your latitude during winter.

These angles will give you the best overall output all year round if you are going for a fixed installation. Actually, it is possible to increase energy production further by adjusting solar panels based on the season.

The angle of the sun not only changes based on different latitudes, but also with the change of seasons. According to the research, the sun is lower during the winter months and higher in summer months. This means that if you want your solar panels are always positioned for maximum exposure to sunlight, you would need to adjust them for each season.

Here is the adjustment schedule we recommend:

The above are general guidelines, you may get better results by customizing your adjustment schedule.

The performance of solar panels is affected by their angle of inclination. To extract maximum power from a solar power system, you would have to adjust the angle based both on latitude and season.

In real situations, you often have to deal with fixed roof angles where there is no option to adjust or tilt the solar systems. Because of this, solar systems are installed across a range of tilt angles as a means to accommodate a variety of roof pitches found on homes – effectively saving homeowners money.