Solar technology is fast evolving every day. The solar panel is the most necessary and important part of a solar system also need to evolve for better and efficient functioning and also to overcome the current limitations. A great thing about solar panels is that they keep working all day. It doesn’t matter if the sun’s just risen, or just about to set. But what would you say if I tell you there are solar panels that pick up sunlight from the underside too and deliver up to 30% more energy?

In this article, we will focus on a latest technology solar panel, called bifacial solar panels and discuss its features and advantages over the existing solar panels. 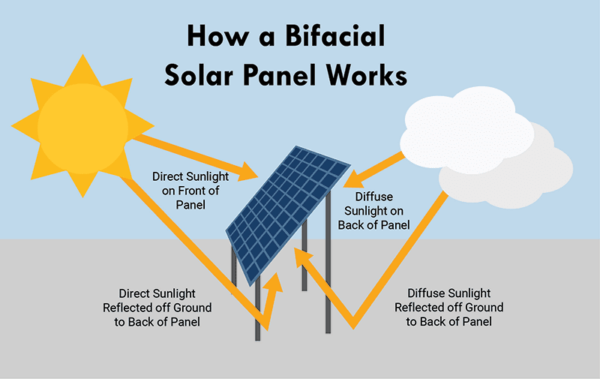 What is bifacial solar panel?

Since they’re made to be completely transparent, they are usually made of glass. The top of each solar module is covered in protective glass. The flipside may be glass or a clear backsheet. This is different from conventional solar panel systems with opaque backings.

How do they work?

The top solar cells of a bifacial solar panel face the sun so they can absorb the available sun rays directly. This make is it no different than a conventional solar panel in this sense. The bottom cells, however, are designed to absorb reflected light. This means that unlike conventional one-sided panels, bifacial panels produce more energy when you angle them to a white roof or to the ground.

In these types of installations, there is a great amount of reflection. That’s because sunlight bounces off of all objects reflectively at many different angles. Bifacial solar panels are better able to capture more of it. They are even productive on cloudy days when monofacial solar cells are at a greater disadvantages.

You can also capitalize on the earth’s daily rotation in relation to the sun. To produce two energy peaks throughout the day, half of the bifacials in an array can be tilted toward the east to capture sunrise and morning rays; as for the second half, to the west, to soak up afternoon intensity and sunset rays.

Bifacial solar panels are the futures of the industry. Although bifacial systems are slightly more expensive than monofacial modules, the power bonus you’ll get from them is more than enough to justify the cost.