Fishery-solar hybrid system refers to the combination of fishery farming and photovoltaic power generation. A photovoltaic panel array is erected above the surface of the fish pond. The water below the photovoltaic panel can be used for fish and shrimp farming. The photovoltaic array can also provide a good shielding effect for fish farming, forming a new mode of power generation.
Fishery-solar hybrid system can not only realize the cross-border integration of China’s clean energy and aquaculture transformation and upgrading, but also greatly increase the value output per unit area of land, realize the composite utilization of land. It not only directly promotes the transformation and upgrading of China’s aquaculture, but also accelerates the pace of China’s energy structure adjustment and promotes the process of China’s energy revolution. It creates a new path for the sustainable growth and green development of China’s economy. 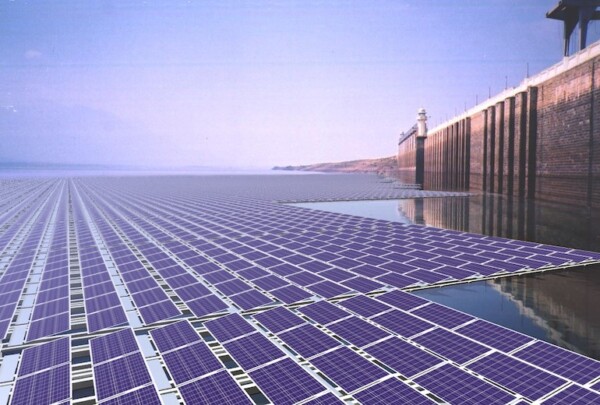 The fishery-solar hybrid system is the combination of photovoltaic power system and fish ponds. The general form is photovoltaic panels on the top of the fish pond. The electricity generated by the photovoltaic panels can supply power to the entire fish pond, or it can be sent to the substation through the collector line and integrated into the grid. However, with the traditional model, the fishermen face some problems.
1. Difficulty in fishing: The pillars of photovoltaic panels are arranged on the water surface in an orderly manner. The distance between the pillars is generally 5 meters. There are about 27 pillars in an acre of water. It is hard to spread the fishing net between these pillars.
2. Inaccurate feeding: When feeding fish in wide water areas, it is difficult to spread the feed evenly, which is not only time-consuming and labor-intensive, but also costly.
3. Oxygen supply: When the density of fish population is high, the lack of dissolved oxygen in large ponds is easy to occur, resulting in sudden mass death.

Photovoltaic fish ponds are not strange for people who go solar, but in Xixi Township, Xichang City, Sichuan Province, there is a fish breeding base whose breeding volume is ten times that of ordinary fish ponds.
The more important is that it cleverly avoids the inconvenience caused by photovoltaic panels. Photovoltaic panels are laid in 75% of the 1,100 acres of water, and only 25% of the water is used to raise fish.
In order to solve the problem of fishery-solar hybrid system, the best fish farming mode is to separate the photovoltaic panels from the water areas where the fish are raised, and to build a tank for the fish. In addition, an intelligent method is also adopted in fish feeding. After accurate calculation, the fish in a tank are fed four times a day, each is feed 50 catties, therefore the feeding is more accurate.
The role of photovoltaic panels: Provide clean energy for the sink system: 825 acres of photovoltaic panels can generate 120,000kWh of electricity for one day.
Advantages of fish farming: In the scorching summer, with the shelter of photovoltaic panels, the water temperature of the fish pond is 1℃ to 2℃lower than that of traditional ponds. These relatively low-temperature water will enter the tank to raise fish, which solves the problem of loss of appetite of fish due to high temperature.
Better breeding effect: The breeding effect of fish ponds can reach the highest level with the shelter of photovoltaic panels, which lowers the temperature of the water to greatly increase the comfort of the fish in the tank.
Fishery-solar hybrid system combines aquaculture with photovoltaic power generation, forming a new model of above-water power generation to achieve the harmony between fishing, electricity, and environmental protection.
By SRNE|2022-02-24T14:57:31+08:00February 24th, 2022|Blog, Free Guides|Comments Off on The New Model of Fishery-solar Hybrid System